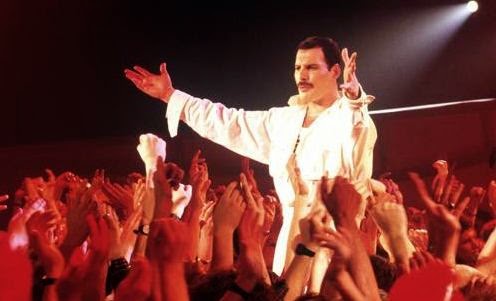 After yesterday, I guess they thought they'd throw us a bone. Many of the elevens went in immediately, like STADIUMROCK (1A: Queen's music) (If we're stretching for another Friday mini-theme, we can pair this with EUROPOP (37D: Abba's music) and call it good) and DEARREADER (12D: Lead-in to some written advice), or with just a couple crosses, like DRIVETOWORK (53A: Commute, in a way) (would have preferred "Bike to work") and HOWONEARTH (26D: Exclamation that might be punctuated with "??!?"). And once you've got a few of those in place, things just kind of fill themselves in. At least they did today. I think my only write-over was going from "plum tomato" to ROMATOMATO (14D: Option for a marinara base). And really, a Roma is a plum tomato, sooo…. Oh, and I wanted "soil" for SITU (1D: Archaeologists often find what they're looking for in this), but really, can you call it "in situ" if it's just in the ground? I mean, it's no longer in the place where it was being used, or was stored. It's in the ground. After being tumbled by some force and then buried. I guess the things unearthed at Pompeii could be said to be "in situ," but could it be said of pot sherds dug up in Tuscany? I don't really think so. Still, it was trying to be cute, so I guess I'll give points for effort.

Pretty clean, overall, with just the somewhat odd YTTRIA (21A: Oxide used in picture tubes) and the completely unknown (to me) NER (30D: ____ Tamid (ever-burning synagogue lamp) to make it look a little more Friday-y. The stacks in the SW and NE make for mini-stacks of threes, but I thought those were clued quite well, so I'm not complaining. ORE (48A: It's often an oxide) was trickier than normal, and DIR (12A: Film developer?: Abbr.) and ADM (18A: Big gun on a ship) were both kind of fun.

Overall, I liked it.