I enjoyed this one quite a bit. Any mention of EMMAPEEL (32A: Diana Rigg's role on "The Avengers") is a good thing, as is any reference to FISHANDCHIPS (27A: Some British pub food). VROOM (21A: Souped-up engine sound) and DRECK (37A: Junk, from Yiddish) are fun words, and the theme of "Jelly ____" is decent. 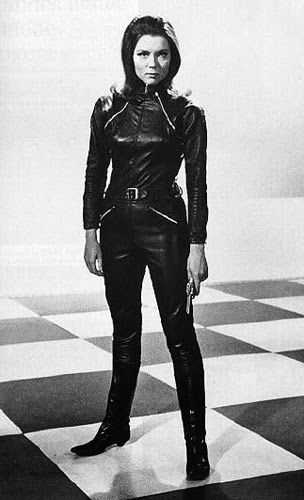 Add to all that the relative cleanliness of the whole thing (I don't particularly like the partials INAS (57D: Bring ____ a third party) or ICAN (29D: "Not if ____ help it), but they're not terrible), and you've got an enjoyable Monday romp.

A few more thoughts - I like the juxtaposition of COCOON (7D: What a butterfly emerges from) and TEEMED (8D: Overflowed (with)), with their symmetrical patterns of the identical vowels. I chuckled at the utter simplicity of the clue for SKY (5D: Clouds' locale), and speaking of straightforwardness and simplicity, I also enjoyed FATALLY (27D: How Hamlet stabs Polonius). No "through an arras," or "mistakenly," here - just "fatally." Heh.