The theme of this one blew me away. I mean, who notices that WAITING (20D: On hold … or what the seven rows of black squares in this puzzle's grid spell in Morse code) can be worked into a puzzle grid so that it is symmetrical? It's brilliant! 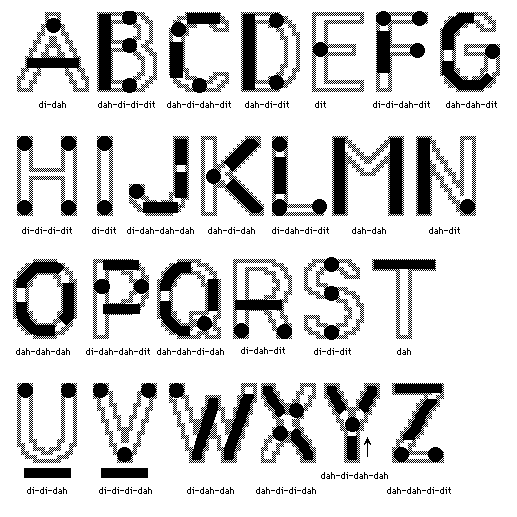 Really. I just think it's so cool that I hardly even want to dissect the puzzle at all. I just want to bask in the glory of the theme. The getting-almost-routine Friday mini-theme.

But I suppose I have to say one or two things. I'll start with a bad one, so I can finish up with more good things. OLDAGEPENSIONER (1A: Elderly person on a fixed income) seems a bit awkward. There. Also, I've never heard of VOSS (18A: 1957 Patrick White novel adapted into a 1986 opera). Should I have?

The rest of the fifteens were pretty decent, though. I enjoyed RACETOTHEBOTTOM (17A: Deterioration of standards by competitive forces) and STEMLESSGLASSES (60A: Tumblers) the best.

Also enjoyed FAZOOL (21D: Pasta ____ (Italian dish, informally), and the too-too clever PAT (7D: Word that is its own synonym when spelled backward).

Lastly, I feel we triumphed in a small way today by making good on a promise made earlier this week. We did not hit "submit" as soon as we put in the last letter, but reviewed (we found two typos!) and revisited a known problem area for us - the H in CHAW (48A: It's a mouthful) and HOTL (49D: Lanford Wilson's "The ____ Baltimore"). I think I had an R in there, but "ROTL" made no sense. "HOTL" didn't make much either, but I assumed that it must be short for "hotel," and Frannie thought maybe it was like a neon sign with a letter out. Either way, we went with H and got the "Well Done!" Very satisfying.