CORNERSTONE (36A: Where one might find a date … with a hint to this puzzle's theme) sits right in the center of the grid, and refers to the four corners. It took me all the way until I got to 49D: Part of many a mill (GRIND[STONE]) to finally realize that we needed a rebus today. After that, of course, things fell apart rather quickly. Some critics criticize symmetrical rebus puzzles, because finding one, as here, lets you know where all the others are, but today it didn't bother me. Maybe because I was solving this one during a lapse in my sleep, at around 5am, or maybe because I still found it to be a fun puzzle. The revealer clue (first sentence) is cutely phrased, and I like the related 11-letter entries. 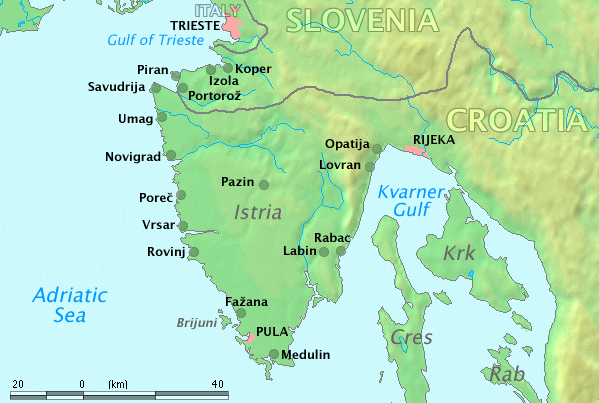 I learned a bit of geography today, as I don't think I've ever heard ISTRIA (44D: Adriatic peninsula shared by Italy, Slovenia and Croatia). Italy just barely gets onto it, but Trieste is close enough, I guess. Other things I barely knew, if at all, are SIMI (58A: California's _____ Valley) and SAMI (58D: Laplander). Even though I'm half Finn, my people are from farther south, and I put in the S based on only a vague memory of seeing that California valley in another puzzle.

LIENOR (47D: Note holder, of sorts) and NITROCAR (25D: Certain dragster) are groaners, and TOPE (34D: Imbibe) is kicking it old school. I looked that one up for the review. It's from an obsolete form of "top" that also meant "to drink," and led to the phrase "top off." I never thought about it before, but "top off" doesn't really make much sense if you think about "top" meaning the uppermost part of something. I suppose you could think that you were continually taking the top off of the drink, but would anyone say that? Well, maybe. Especially someone who had taken the tops off of several drinks. Heh.

So I've gone on and on about the obscure and the odd, but really, I liked it. I liked WINESAP, ATLANTIC, ZIPCODES (23D: Letter numbers), EMOTICON (39D: Means of communication using dots and dashes) (nice clue), ATOM (16A: Topic of elementary education?), and IMEMINE (42D: George Harrison's autobiography). It's not perfect, but it was fun enough. Good Thursday.