The theme came quickly here, as I knew that the Kennedy half-dollar (KENNEDYDOL) was released in 1964, but at first I just entered "halfdollar," because I had not yet figured out the trick. Soon after, though, I got IDES (2D: May 15, e.g.), PAN (4D: Give two thumbs down), and then ELYSE (6D: "Family Ties" mom), and that was that on the theme. OLEMISS (5D: Oxford university, informally) took way too long, as I was thinking just like Mr. Emmons wanted me to, of England, and I kept thinking, "It's just Oxford!" But no. It was Oxford, Mississippi. HOODWINKS (8D: Tricks), on the other hand, came very quickly, (maybe because I had just been hoodwinked!) even though I worried, as I did with FACEVALUE (31D: 1¢, for a penny) that because it was so long it would also be a part of the theme. I guess the cut-off was ten letters today for theme material. 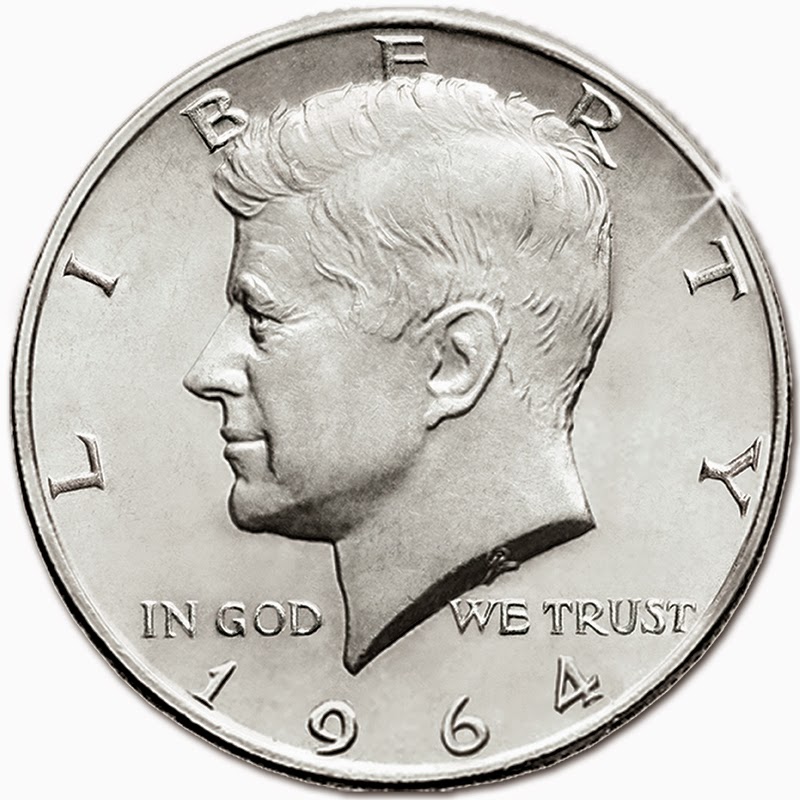 And getting back to the theme, I didn't love SUPERBOWLTI (24D: Occasion for a much-hyped performance). I mean, I guess that halftime is the occasion, still I wanted "Halftime Show," but that, of course, would not have worked well. The other two, GOINGOFFCOC (10D: Acting rashly) and FLYINGATMA (54A: Signaling remembrance, in a way) were both good.

I enjoyed the clue for HIKE (1D: Up). So tricky. And "1A: Nile wader" had me thinking of a stork, or some other fragile bird, not a HIPPO. Hah! And in the other corner of the grid, CHARGER (40D: Cell need) had us stumped for a good long while. Right next to that, GRIN (42D: Small beam) and TAILS (46D: Flip response?) were both excellent. But it was ELLEN (58A: Liberian president and Peace Nobelist, ____ Johnson Sirleaf) that got us. I made two guesses on letters in that name, and got what should have been the easier one, in retrospect, wrong. I put in "AgE" for 55D: Draft classification (ALE) (better), and then guessed correctly on KANE (52D: Rapper Big Daddy ____). Oh well. If I had just been more up on world politics, it wouldn't have had to happen this way.

Overall, though, a decent Thursday puzzle. Some zippy fill, and a fun theme.

Posted by Horace Fawley at 3:29 AM