I didn't love it. It's Thursday, and I want something more than 15-letter song names. There, I said it. Plus, the whole thing lacked sparkle. Lots of names I am not familiar with - ERIQ (16A: La Salle of "ER"), SHERRI (23A: ____ Shepherd, former co-host of "The View"), DEEDEE (42A: Clinton aide Myers), SISI (40A: Egyptian president Abdel Fattah el-____), OTIS (54A: Milo's partner in film), and RAYE (8D: Madcap Martha). Sure, I should probably know at least a couple of those, and Martha Raye's name sounds familiar even if I couldn't pick her out of a lineup... and really, it's not a crime to include names I don't know, but so many of them in one puzzle? That's a crime. And speaking of names, there are even more that I did know - ADELE, MILNE, ALOU, GERARD, STIEG, KESEY, IVANA, TROI... and then you've got trade names ARNEL, EBAY, SKYY, ICEE, SALS, and ENOTES. That seems like a lot.

On the brighter side, though, I enjoyed PARISIANS (3D: French capitalists?), and ANKLES (50A: They're just over two feet) was lovely. The aforementioned IVANA (14A: Trump caller, once?) was given a funny clue, as was ALOU (33A: Giant Jesus). That last one is my favorite clue today. 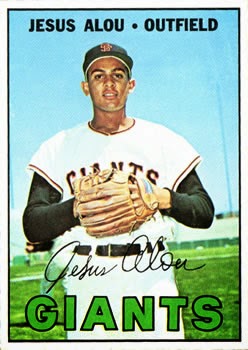 But overall, I did not enjoy this one. APERS, EDENS, AVOW... blah. SQYDS (13D: Flooring measure: Abbr.) looks great, and I like the old-timeyness of WHENCE (43A: From what place), but it's not enough.

Posted by Horace Fawley at 5:00 PM