This was a fun one. I really like the wide-open corners of little three-stacks. Looking at them again, I'm reminded that I don't usually spell TEENTSY (45D: Minute) with that second T, and I've never heard of JOCKJAMS (1A: Popular series of 1990s compilation albums) (popular?), but the rest of the stuff, led by JACKASS (38D: Jerk), was pretty good. 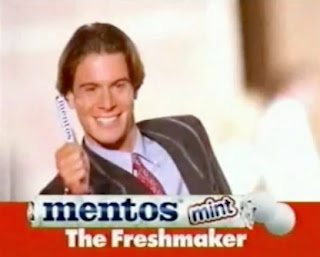 It's always a balance, though, isn't it? I see IDEATE (31A: Get creative), which is a creative use of language that I don't love, right next to REJIGGER (33A: Adjust) which I think of as a good use of modern lingo. And we've got the difficult OTTAVA (48D: Up or down 12 semitones, in musical notation), and the stuffy ARREAR (58A: Overdue amount), but we've also got OHGODNO (26D: "That's a terrible, terrible idea") (maybe my favorite clue/entry) and MURSE (9D: Metrosexual satchel).

It's funny to see EVENODDS so quickly again after Jeff Chen's puzzle last Thursday, and 28D: Historical Allen (ETHAN), is similar to "Historic Scott" from yesterday. TBILISI (20A: Supreme court of Georgia locale) took me way longer than it should have, as did CARAFES (41D: Red and white containers). Ooooohh... red and white wine!

SADTOSAY, I would not go so far as to call it STELLAR, but IDECLARE it to be a very good Friday.
Posted by Horace Fawley at 7:16 AM