Hello Mr. Markey!* A very nice theme, and tribute, to the "Road Movies" of HOPEANDCROSBY (24A: The film's headliners). Eighty theme squares is a lot, and they are everywhere, making this one almost all about the theme. So much theme puts the grid in a bit of a stranglehold, and leaves us with crosswordese like ANIS, ANIL, OPES, and EDDA. We also get the unfortunate ALINED (42D: In a row: var.), and the unfamiliar (to me, anyway) YODER (29D: Wisconsin v. ____ (Landmark 1972 case on religious freedom)). My last square was the O in that name, where it crosses AON (32A: Get an ____ (ace)), which took me a long while to understand. 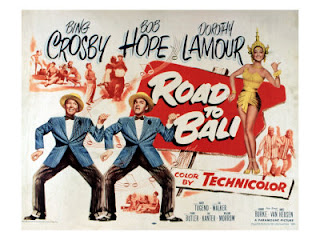 Still, even with all the theme constrictions, there are several non-theme downs that I enjoyed. TUNDRA (5D: Much Arctic land) (for now!), BAYOU (28D: Louisiana inlet), and ACTUAL (23D: Real). MITTEN (35D: Hand warmer) and COPCAR (38D: Black-and-white) did not come to me quickly, and call me crazy, but I almost liked MMCCC (39D: The year 2300) for its craziness. If it had had a slightly more amusing clue I would have actually liked it. :)

Don't tell Frannie, but I can't say I've ever seen more than a clip or two of any Hope & Crosby movie. Still, though, they are classics, and I am impressed by this "double-theme." Sometimes, if the theme is enough - especially in an early-week grid - you can give the fill a lot of leeway. I think that's the case here.

* I met Mr. Markey briefly at breakfast at the NCPT this year. I spoke with him, as I did with some other constructors, about the problem of getting to know them at all, because I feared that it would be difficult to be completely objective about their puzzles after meeting them in person. They all told me that they don't mind constructive criticism, but they did not particularly like diatribes that felt more like personal attacks. We have tried to be level-headed over here at Frannie & Horace & Colum, and I hope that comes across.

p.s. Our friend Huygens will certainly love this puzzle, as he and his wife will be on the road to Bali in less than a year! Qatar yesterday, Bali today... what's left for tomorrow? Perhaps you should be on the lookout for your next exotic destination!
Posted by Horace Fawley at 8:05 AM