I got the lead out pretty quick on this one. BRUCELEE (9D: Kato potrayer in "The Green Hornet") went in immediately, and I wanted LI[PB]ALM for "10D: Blistex products" but, of course, it didn't fit, so I put in "LIP" and left it at that. KEATS (12D: "A thing of beauty is a joy for ever" poet), too, went in immediately, so when I came to 19A: Optimistic (U[PB]EAT), well, that was it. Well, except for the revealer, LEADBELLY (61A: Legendary guitarist ... or a hint to eight answers in this puzzle), which took me several crosses. It's not that I haven't heard of him, but perhaps it's that I don't really think of him as so much a "legendary guitarist" as I do a "legendary folk singer." Still, nice revealer. It might have been better if the "bellies" had been dead-center in the answers, or if the revealer had included the rebus somehow, but one can't have everything, can one. 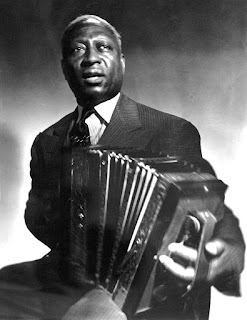 In other news... there is a severe lack of BRASSERIEs (31D: Restaurant that might serve steak frites) in this country... but I suppose they must be referring to the ones that are here, because overseas it might be harder to find "steak frites," whatever those are, at a brasserie. And speaking of indulging, OVEREATER was nicely clued with "11D: One taking extra courses?" I suppose some will argue with the question mark there, and I will not argue with those arguing.

The North is abbreviation-heavy, and BELG seems an odd abbreviation for Belgium, but the rest are common enough. GOOP coming out of the PEEPER is gross, as is SCAB. And does 4D: Mea culpa" really mean APOLOGY nowadays? Hmm... after a quick perusal of online sources, I guess it sort of does, but it still feels odd to me.

As you can maybe sense, I didn't fully love this one. I always enjoy a rebus, but there were just little things (and big things, like INANEST) that rubbed me the wrong way. I loved 49D: Like M, L or XL, but not S (ROMAN), and 59D: Adam's apple site? (EDEN), though, and the other stuff I already mentioned, so let's give it a thumb's up overall.