I did not realize, until long after doing the puzzle, what the theme was. I shouldn't probably admit this, since it shows how out of touch I am with most things current and modern, but when I was solving, I did noticed that all the theme answers began with "ATT..." but I failed to understand that it was really representing "@T..." and mimicking a Twitter handle. EVEN THOUGH IT SAID IT IN THE FIRST CLUE. Wow. What a maroon.

That lack of understanding might account for my slow time, which, thanks to a new app feature, I can say is slower than normal, but it did not diminish my appreciation for this fine grid. Six ATT words, all cutely clued. My favorite was 53A: Good Twitter handle for a eulogist? (ATTRIBUTE), but 17A: ... for a seductress?" (ATTEMPTING) was also good.

Where this grid really shines, though, is in the long downs. Eight clues over seven letters, the weakest of which is ALITTLE (43D: Not much), and the strongest being hard to decide upon. CATACLYSM (6D: Large-scale disaster) is a front runner, but TAXIDERMY (35D: Professional stuff?) could edge it out based on the clue. 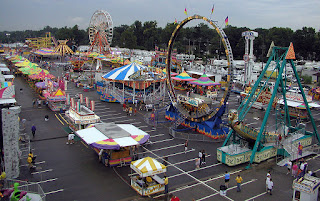 STATEFAIRS (10D: Events with Ferris wheels and livestock competitions) is perfectly timed. Frannie and I saw one that had suddenly popped up in a roadside field as we drove west yesterday, and marveled at their persistence. It's kind of nice to think of the tradition still carrying on.

So although the West got a little iffy with OTRA, GRATA, and SANTO, there's plenty of good stuff holding this one together. I call it an especially good Monday.