Kind of a non-Thursday-ish theme, the HIDDENGEM (34D: Well-kept secret ... or a hint to the answer to each starred clue) - where each theme answer contains the letters "GEM" in succession, split across each of the two words in the answer - but well done, I think, and clued tougher than it would have been had it run as an early week puzzle. The NW and N, in fact, were left undone after nearly twenty minutes of puzzling before work, and had to be finished up over my lunchtime espresso. And speaking of that, I'm loving the "portable" nature of the NYTX subscription. I can start it on my laptop on the porch in the morning, then open my iPad Mini at lunch and it fills in just as I left it on the laptop, and then when I come back in the evening, it's finished when I open the laptop again to hammer out the review. Frannie and I were thinking of using that feature to "work on the puzzle together" while she was in the Netherlands for a few months this Spring, but then she just ended up buying her own subscription. It worked out well that way, though, because now it's back to how it used to be when we met, when we each had a subscription to Games magazine and would race each other doing the crosswords. Did you hear that, Will? We're long-time fans! 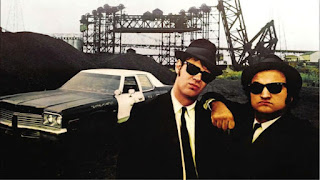 So anyway, about this puzzle... I never, ever would have come up with a DODGEMONACO as (*24A: Model of the Blues Brothers' Bluesmobile), would you? And "13A: Spring's counterpart" is a damn tough clue for NEAP. Spring tide, neap tide... who knew they were opposites? Mariners, sure, but us common land-lubbers? "2D: Reading material for the future," on the other hand, is an excellent clue for TEALEAVES. And in the opposite corner, BARRISTER beside ALLEVIATE beside HIDDENGEM makes a lovely little stack.

The fill was generally good overall, and the theme was solid. I also enjoyed the novelty of the arrangement of theme answers. It's always nice when some are Acrosses and some are Downs. Good Thursday.

p.s. When I typed in this constructor's name, I didn't recognize it, and I wondered if it was a debut. Well, it is. I'd love to have a Thursday debut! Congratulations, Mr. Rothlein. We'll be anxiously awaiting your next one.
Posted by Horace Fawley at 9:28 PM