THE CALL OF THE RACE

Fitting, I suppose, that they should have a horse racing-related puzzle on the same weekend that American Pharoah won the Triple Crown. 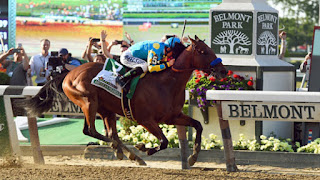 And it's not just the theme clueing that was good. I enjoyed the interesting 61A: Sound you can't make in your sleep (ACHOO), 42A: Tool made to scale (ICEAXE) (no question mark!), 92A: Calculator that doesn't shut off (ABACUS), 50D: Arab city whose name is an anagram of ARABS (BASRA), and 27D: How the careful think (TWICE), to cite just some.

Some of the long Down fill is quite good. DISLEXICS is good, TRENCHANT (13D: Penetrating) is an excellent word, TEMPORARYTATTOOS (37D: Cracker Jack prizes that leave a mark) and ONEAFTERTHEOTHER (15D: In succession) are, oddly, longer than any theme fill, but both are good-looking fill, and the former is clued quite well.