Sub-four even while half-listening to the Sunday Night Football game in the background, and what's more, even with IRENIC (43D: Peaceful) in the grid! (It's from Greek.) Who knows, maybe the background football helped with TROYAIKMAN (17A: He quarterbacked the Dallas Cowboys to three 1990s Super Bowl wins) - Mr. Aikman was in a pretty funny commercial during the first quarter.

My recent method for early-week puzzles is to start with the Across clues until I hit one that I don't know immediately, and then I move to the Downs, starting as close to 1D as possible. Today, the acrosses were going so well that one of the first ones to hold me up was the revealer! I had already gotten the first two themers, but I just didn't even bother to assign any brain at all to the theme. As soon as I saw it was the revealer I skipped it and moved on.

But now that I have gone back to figure it out I love it! Everybody loves the Classics, right? I heartily endorse this Monday theme focussing on the ILIAD. It was on my mind already today because of one of the theme answers in the Sunday crossword - "91A: Troy, in the 'Iliad'" (PRIAMREALESTATE). Heh. Funny. 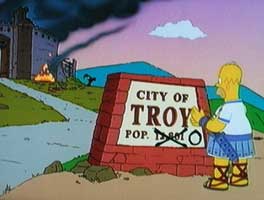 The fill is decent. There are those nice side-by-side nines in the SW and NE - ELECTORAL (31D: Kind of map often colored red and blue) beside SOPHOMORE (32D: Many a junior varsity player) is the better of the two pairs, but the other isn't terrible. There is the aforementioned IRENIC, and ARON, SARI, ALOT, ADEN, FALA(!), and OMAN, but I'm giving it all a pass for the theme.

p.s. There's a nice transcript of Will Shortz working on 1D and 2D from this puzzle over on Xwordinfo.com. It's an interesting look into the editing of a puzzle.