It's a SINGULAR theme today. Items that are really just one thing, but are commonly referred to in the plural, are here given in compound words where they appear in the singular. I say again, it's nothing short of Singular! The most distant from normalcy is SUNGLASSLENS (24A: Something in a movie star's frame?), but the convoluted clue (glasses frame, not frame of view, or any other frame) kind of makes it ok. The other three are all quite normal and quite good. So thumbs up on theme. 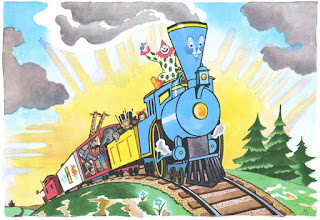 In the fill we find lots of crosswordese: ALPS, RIAL, DEJA, NOM, ALOE, CLI, OCTO, IDES, EKES, and OMANI, for example. That's kind of a lot. And I don't particularly like ROUSES (48D: Awakens), and would prefer "rousts." Yes, ROUSES is really fine, but as I said, I don't prefer it. It's my prerogative as a reviewer, right?

But there's some good stuff, too. ITSUPTOYOU (29D: Line of latitude) is quite tricky, and took me forever to figure out. GUITARHERO (30D: Popular musical game beginning in 2005) is fun, and speaking of fun, I also loved the clue for MESSKIT (46D: Collection that, despite its name, is orderly and compact).

I liked the mini-themes of "Valley of the Kings" and "Meh," and I wonder if Huygens knew 38A: Symbol for water potential (PSI). I didn't, and I thought it strange that water should have its own symbol for potential. Do other liquids use different Greek letters? And what about solids?