Another challenging puzzle, just like we like at the end of "the turn." (That's what we here at H&F&C call the Th, F & S puzzles, as a set.) It started very slowly last night, but this morning, with coffee, things came together. I had put in bits and pieces, and finally ended up filling it in backwards, from the SE up to the NW, where I had mistakenly entered AcKROYD for 1D: "Brother" player of old TV and film (AYKROYD). That gave the extremely problematic "cAH__" for 14A: Email option. I was open to the possibility that I had spelled his name wrong, and I showed it to Frannie. She stared at it a while, and we considered "RuLE" and even "namE" for 4D: Assumed thing (ROLE), but nothing worked. Finally, she gave it back to me, and when she no longer had to look at the erroneous C, she was able to think more freely, and finally said, "What if it's an email provider?" and that was it. YAHOO!

Our trials aside, I like the look of the grid with its cross in the middle and open sections throughout - nothing too fancy. The fill gets a little strained in places - Like the PEDI, OREN, TSOS block in the South, being crossed by the lamentable trio of REPOT, NABBERS, and ROADEO. Sheesh! MERLINS, too, is an odd possessive partial, but at least it's Merlin. Frannie loves the new show by that name, so I guess I'll let that one go. All that in the service of WIFFLEBALL (49A: Game named for a synonym of "strikeout"). I love WIFFLEBALL, but was it worth it? Maybe. :) 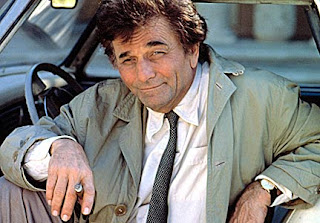 In other areas, though, we get sliding stacks like BELLYLAUGH (21A: Hearty har har) (nice), DISEASE (24A: Etiologist's study) (very Saturday-ish), and YOUGOGIRL (26A: Encouragement often given with a snap). The SW is nice, too, with its EXWIFE (42D: Split personality?), GAYICON (35D: Cher or Madonna), and OZZFEST (36D: Tour often featuring Black Sabbath). It's a little weird, though, that the end of that last one is right beside FESS (50D: Cop (to)). And isn't it "fess up," not "fess to?" "Confess to," sure, but "fess to?"

I guess in the end, I enjoyed the challenge, but reviewing it now I see a lot of EVILER, INSTR, OBS, and ENTS. But then there's also CARIBOU, NEMESIS, APOGEES, and LEGALPAD. Everybody loves a LEGALPAD. So I guess I'm torn. I guess I'll give it a slightly upturned thumb.

1A: Gulf of Guinea metropolis (ACCRA). C+
Favorite clue/answer - 34A: Foreign pronoun that sounds like a fish (ILS). Ha! They got "eel" in there without actually having to put it in! Hilarious.