I enjoyed this puzzle. The transitions between the three sections were tight, and the four linking entries - GEMINIS (26A: Kennedy and Bush 41, but no other U.S. presidents), BETWEENUS (29A: "Mum's the word"), ESCAPEKEY (35A: It's in the far northwest) (that's a little cheap, I think), and SUBARID (38A: Moderately dry) - did not come quickly, but the sections were thick enough so that you almost always had a cross for something - provided, of course, that you could get a few starters! One such, for me, was GOMPERS (21A: Pioneering labor leader Samuel). I wasn't positive about it, but it fit, and hey, it worked! I also guessed RES (20A: ____ nullius (no one's property)) without crosses - but needed a few for JURIS (24A: Nullius ____ (of no legal force)). That's a nice Latin pairing. And on the "non-high-fallutin' side, I also dropped in ROBOTO (41A: "Mr. ____" (Styx hit)). Hah! 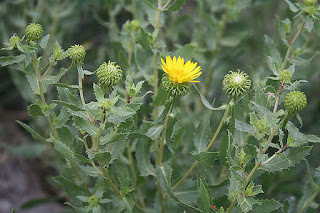 Some lovely fill today. POMPOUSASS (3D: Blowhard) is, I think, my favorite, but NOTORIETY (9D: Unwanted attention), GALOSHES (34D: Couple taken out on a rainy day), VAMOOSED (17A: Amscrayed), and NOSTRIL (42A: Blow hole?) were also quite good. Lot's of "quote fill" today - OHDEARME, SUREYOUARE, BEPATIENT, IMLIKE (love it), and the aforementioned BETWEENUS. I always find these types of answers a little more difficult to guess, but I don't really have a problem with them. I guess I used to, but I've come around.

There's a little glue, like SMA and EMP (who knew they were considered "Emperor of India?"), but with so much quality material, I don't care at all.