I made four mistakes in this grid, all in a little block in the right center. Early on, I guessed "ArtS" for 35A: Affectation (AIRS) (better), and when I came to my last couple squares - the first two of 38A: Veterinarian's branch of sci., I couldn't think of anything but "biOL," so I put that in. It took me a minute or two to realize that both words were wrong, but it really shouldn't have, because even though I didn't know IBIZA (28D: One of the Balearic Islands) off the clue, I should have known that IBrbA wasn't right. Same with TUtiW... So, in short, a DNF. 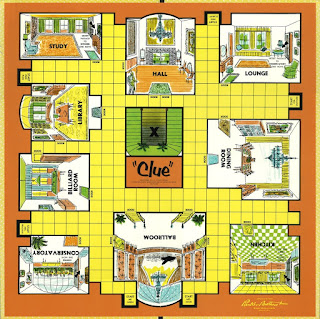 Aside from all that, the theme didn't really do much for me. Sure, I use Amazon - who hasn't? - but I've never visited POLITICO or GAWKER, and I've never even heard of a Web site called VULTURE. So the wacky cluing that I usually love so much was diminished today by my own ignorance. I hope that this kind of thing brings in the young folks, but for me, the one doing the rating today, the theme fell flat. I'm giving it a C-.

1A: Squelch (STIFLE), on the other hand, I'm giving a B+. Both clue and answer are unusual and interesting.