Kind of a cute, wintry name-reworking theme today. If the thermometer outside our kitchen window still showed negative numbers I might not be so happy to see this, but as it now reads above 32F, I'll take it in stride and smile at answers such as EDWARDSNOWEDIN (20A: Informant trapped after an icy storm?), JODIEFROSTER (26A: Actress with an icy stare?) (I bet this is sometimes true), and BARRYCOLDWATER (52A: Next Republican nominee after Dwight D. Ice in Shower left office?) (wow... what a clue!). CURT CHILLING (44A: Pitcher of ice?) seems a bit like the one who doesn't belong, being, I'm guessing, slightly less universally well-known, but then, I could be wrong about that. Goldwater is from the 60s, Jodie Foster's work has slowed down since the 80s and 90s, and Edward Snowden has been "out of the picture" for a while now. So I won't presume to presume what people know or don't know. I will, instead, simply give the theme a B+ rating. I liked it, but I didn't love it. 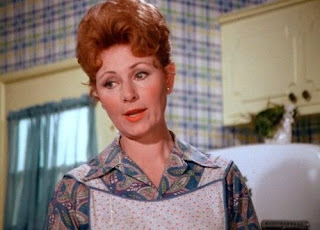 1A: Derby sound (NEIGH). B-. If derby hats made any kind of noise this might have been a little more interesting, but as it is, NEIGH is a decent enough word to move it into the B range. And my favorite clue/answer today is the slightly absurd "42A: Like a trampoline" (BOUNCY). It made me smile.

The fill had some good, unusual bits, like NEWINTOWN (11D: Like a recent transplant), THEREALME (33D: Who I am inside), PHRYGIA (41D: Realm of King Midas) (!), and ONAWHIM (43D: Just because). I like all those, but is "the real me" really who you think you are, or who others think you are? I'd argue for the latter. It's certainly the more relevant.

There was a little of the usual junk, but overall, this was a fine Wednesday.