A theme last Friday, and now a trick puzzle on a Wednesday? I don't know what the world's coming to, but I like it!

Today's revealer is 37A: Goes underwater ... or a hint to the answers on the perimeter of this puzzle (SUBMERGES). From that we learn, eventually in my case, that the understood prefix "sub" merges with each theme answer in the grid to make the proper answer. As in: 1A: Lofty in thought or manner (LIME) = sublime; 10A: Puts down by force (DUES) = subdues; or 68A: Take away (TRACT) = subtract. I love that each entry actually in the grid is a real word on its own, and it's nice that it runs all the way around the edge. Overall, I'm giving the theme an A. 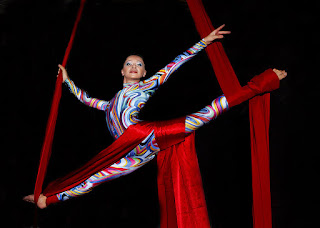 Looking through the answers now, I think it would be rather easy to be full of complaints. STAGG (22A: Football legend Amos Alonzo ____) is a bit of a stretch, and ENBANC (28A: With all judges present) and 54A: Mens ____ (criminal intent) (REA) are two pretty deep foreign-language entries. Then there's stuff like VOA, INME, EMAC, ULT, and GEST (38D: Tale of adventure), but you know what? I still ended up liking this puzzle. I looked up that Stagg fellow, and find that he "developed basketball as a five-persron sport" and is also in the Basketball Hall of Fame. Sooo... that's interesting.

Any Bach clue is ok in my book (BOURREE), I liked TEAHOUSE (33A: Twinings in London is one), and who doesn't like SASHIMI (43D: Sushi bar option)? OK, Frannie doesn't, for one. And probably millions of other people who think raw fish ought to be either swimming or soon cooked. But that's the way it is, not everyone likes everything the same. Me, I enjoyed this puzzle. You?

p.s. Favorite clue/answer today? 24A: Number of states that border the Mississippi (TEN). I put it in immediately, because it wasn't "one" or "two." I suppose some might have guessed "six," which I hadn't thought of... but anyway, it's a fun way to clue a number.

Posted by Horace Fawley at 7:03 PM