I wouldn't exactly call this puzzle a SNAP for me. I'm a little rusty after three weeks on holiday! Most of the puzzle went right along, though, including the theme answers. The clue for the revealer at 62A, plus a quick glance at nearby theme answer 52A PUNCHBOWL (Party vessel with a ladle), made short work of FIGHTCLUB (1999 Brad Pitt movie hinted at by the beginnings of 17-, 21-, 39-, and 52-Across. I hadn't yet completed 39A at that point, "Like some magazine perfume ads." I wanted to put in COMPLETELYAWFUL, but it didn't quite work with the downs. :( SCRATCHANDSNIFF goes better with the theme, too, I suppose. :)

EOSIN (36A. Certain red dye) seemed a little esoteric for a Monday, but I didn't actually have any trouble with it thanks to the down answers there, whereas I did get hung up for a time in the top right corner. I've never heard of Port St. LUCIE, Fla., and 3D. POULT (Fowl raised for food) didn't spring to mind. For some reason, I was thinking psST for "Word repeated by tapping a microphone" - probably because it's the the French word for TEST - kidding!

We do have some real French entries today, including 46A. Faux ___ (PAS) and 51A. Female friend of François (AMIE). Old and new Romans made appearances (ETTU, DIEM, ARTE) as did the Woman of the Haus (FRAU) to round out a mini Indo-European language theme. 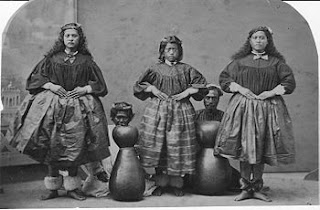 There was a liberal sprinkling of abbreviations and partials throughout (OFA, PCB, TBSP), but most were, at least, less commonly seen (OBLA, BMOC, DIY). I was happy to see EELS in my first puzzle of the week!