I'm not sure about this one. I like the idea of LIFTEVERYVOICE, and it started very well with "bass," "tenor," and "alto" (in order from lowest to highest) running up through theme material, but when it came to the last one, which ought to be "soprano," we get instead "treble." I find that this is supported in the dictionary definition of "the highest part in harmony," but still I find it slightly trebling. I'm around music and musicians frequently, and I've never heard anyone speak of a "treble voice." Sure, there's the treble clef, and the term is common enough, but I just don't hear it associated with voices, which is what is being specifically referred to here. Perhaps our resident music major will sing out with a different opinion, but for me, it struck an off note. 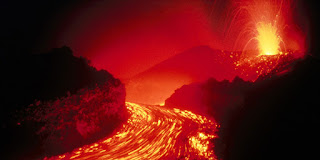 Also slightly off-putting was BARONETCY (6D: Noble domain). It's maybe more normally just "baronet," but then, it's not normal at all, so why not go all out. Oh, I don't know... I wanted to like this one, but I just didn't. TMS, too, rubbed me the wrong way. "Symbols in superscript, for short" - it's not so much a symbol as simply the letters "TM."

But there were things I did like, of course. TEN (21A: 20 under 30) was excellent, and I always love the kind of trivia found in 1A: American dance move that, for whatever reason, is illegal in Saudi Arabia (THEDAB) and 5D: Singing superstar born in Tottenham (ADELE). And I enjoyed the fun new clue for ERIE (3D: Home to Bessie, a lake monster in American folklore). Hah! Another nice discovery was SANTERIA (60A: Caribbean religion with roots in Africa). Now that Sublime song makes much more sense! :)

Little errors and doubts slowed me down today, like putting in SToniER instead of STERNER for 40D: More flinty, and forgetting that there's a MENLO Park in California, as well as New Jersey. And those names! I didn't know MERIDA, BECCA, ELVIRA, RIRI, or RORY. So all that made it a little slower, but things eventually worked themselves out.

I guess it's fine. I mean, TREBLE really does work, and they go in order from low to high, which is great, and I learned a lot, including the fact that LIFTEVERYVOICE is considered to be the "black national anthem." I guess I just didn't love it.