Wow. I had a tough time with this puzzle. I didn't get very far on it over coffee this morning, so I sat down with it after dinner and at least 30 minutes LAPSED, during which the occasional BLEEP was heard, before I got the "Congratulations" message.

Even though I completed the puzzle successfully, I didn't understand the theme until I talked it over with Horace. There were four theme answers that each referred to another answer in the puzzle. For example, the clue for 17A was "Footnote info" (PAGE) and then 18A said "See 17-Across. We realized, after some discussion, that one needed to literally add the "See" from the companion clue to the answer for the clued clue, which would then make a word that matched the long answer. See? :) In this case, the combo was see + page, or seepage, which could be defined as LOSTLIQUID, which was the answer for 18A. The other theme answers were

Very tricky! I think I would have been able to solve the puzzle faster if I had figured out the theme, but I was happy I was able to power through the tough but excellent fill in the rest of the puzzle. I had the most trouble in the north west, not knowing actor LIAM Hemsworth, Dutch artist Jan van der MEER, or the African country that's a member of OPEC, although the latter was easy enough to figure out once I got a break. The clue "Looks beneath the surface, in a way" (SNORKELS) had me on the ropes for a long time, but it's the kind of clue I like: so obscure at first, at least to me, then when you get it, so apt. Apt! Another one I had a lot of trouble with was "Something that's tailor-made" (HEM). I thought this one was a bit more of a stretch, but OK, I guess. Also in that section, I kept putting in and taking out PAGE for "Footnote info" because I couldn't square the short form of "info" with the complete word "page", well, that, and I couldn't figure out "Rough spots" (ACNE) or "Firm affirmation" (ICANSO).

There were a lot of excellent clues that contained multiple possible meanings, just like I like, including "Not yellow" (BRAVE), "Trail" (LAG), "Ran out" (LAPSED), and "Boots" (POWERSUP). I was surprised to see "slangily" added after "Dog" in the clue at 49D in light the ambiguous nature of the rest of the clues. I wonder why the clue wasn't simply "Dog." 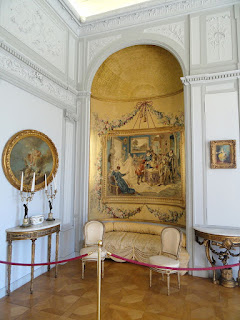 Other favorite clues:
SAW for "Oft-repeated words" is really top drawer.
"What may blossom from buds?" (BROMANCE) is hilarious. Ha!
"That's an order" (EDICT) is very nice.
"Tears for Fears, e.g." (TYPO) - genius!

In sum, a puzzle with some standout clues, along with, luckily (at least for me) some more prosaic fill like San ____, Calif. (DIEGO) and "Rigged game in 'Casablanca'" (ROULETTE) or I might still be INSEARCHOF an answer, or two right now.