A theme of three onomatopoeic foods: TOOTSIEPOP, CAPNCRUNCH, and GINGERSNAP, with SOUNDBITES as a revealer. Works pretty well for me. 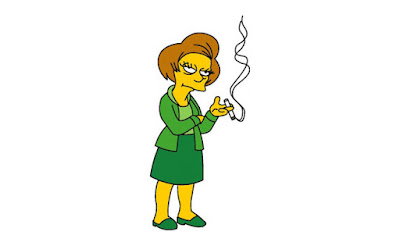 I thought there was quite a bit of good material to be found today. "Slice from a book?" (PAPERCUT) was a surprise, as it always is. The clue for ACCENTS (38A: Two marks in "résumés") gently introduces Monday solvers to trickery usually found later in the week, and INSITU (54A: As originally placed), ROUE (35A: Dissolute sort), and ETERNE (21A: Endless, in poetry) are drawn from the edges of most vocabularies.

I enjoyed the wistful clue for ROADMAP (52A: Plan going forward, as for peace), especially after running into NAPALM (30D: Incendiary weapon used in the Vietnam War). And a CAROUSEL (39D: Amusement park ride that goes around and around) is a calming thing to think about.

GASBAG (23D: Long-winded sort) and ONTHEDL (4D: Hush-hush, slangily) were fun. That last one could also be "On the QT," right? Well, anyway, I left the last two spaces empty until I verified them with crosses.

Overall it was a perfectly cromulent Monday puzzle.