What'll they think of next? Today's theme is the leaning tower of PISAITALY. 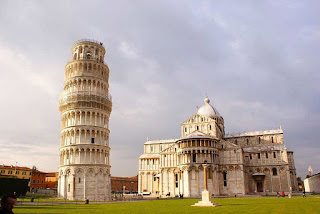 In addition to the tower itself, standing - er... leaning ... - circled in the middle of the puzzle, we get phrases that start with synonyms for "lean:" tip, angle, tilt, and pitch. Cute. Kind of weird, but NOTBAD.

One can't help but wonder whether BUSTED, at 1A, is an extra thematic jab at the architect(s) and builders of this poor structure who, after leaving the first few floors leaning for decades, thought they'd go ahead and WING it and PILE on another couple floors. To be fair, it wasn't the architecture that failed on this marvel, but the ground beneath it, but hey, it's stood for almost 850 years, which is three times longer than anything (save, maybe, some burial mounds) has stood in this country, so I guess that's something.

As there is sometimes with puzzles that have a lot going on, one gets a feeling that it was as tricky to construct this puzzle as it has been for the Italians to keep that building from toppling over. MIDGUT (48A: Intestines' locale) is a little unusual, and the EDDA and The EOLIAN Harp aren't things you encounter every day. But overall, I'm willing to overlook such things for such an ambitious structure.

Posted by Horace Fawley at 9:28 PM