GOWESTYOUNGMAN and grow up with the country! In this case, it's four "LAD"s that travel from the eastern end of their answers to the western beginning. There must be some way that "manifest destiny" could be made to work into a joke about this theme, but I can't figure it out right now... 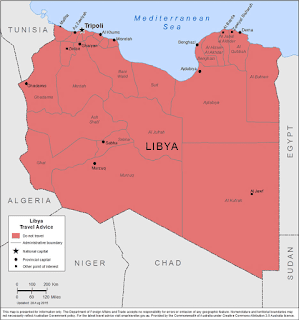 Anyway, it's a pretty solid set of theme answers: "power ballad," "armor clad," "taco salad," and "superbowl ad." It took me quite a while to figure this out. I expected what I thought was the obvious way to interpret the revealer first, that the answers would read entirely in reverse, but that didn't work out. Only slowly did I realize that the end pieces that ended up in front were all "lad"s. The answers look strange in the grid, but if you can get over that, it's a pretty cool idea.

Some tough gets in the fill. OILBASIN (10D: Notable feature of North Dakota and Texas) is not all that common a term, and DECOCT (13D: Boil down) was a surprise, too. I applaud the inclusion of DABBA (8D: "Yabba ____ doo!"), but I don't especially love the partial BOSSA (35D: ____ nova). Funny how some things will bother you and others won't. And I'm sure it's different for everyone.

I had TWISToff and ACTEDBad for a while, and it took me forever to think of ADIG (24D: Take ____ at (insult)). I kept wanting "swipe" or "swing," neither of which, of course, would fit. I still don't think "Take a dig at" is anything anyone would ever say, but whatever, I'm not going to take a dig at ol' Mr. Ezersky over it. :)