It seems to me that it has been a long AISLE since we've had a quip puzzle. I got a kick out of it.

The quip took a while to take shape for me - I had to crane to figure it out - possibly because I worked from the bottom up. I began to see the outlines of it in the south west and center, where, thanks to some straightforward clues, I got what I thought was a good start on Part 4 of the quip, but then I hit a wrinkle. With the letters INTERESTIN staring me in the face, I made a guess that the next letter would be 'g'. Derp. Once I got rid of the 'g' and considered other options, I was finally able to iron it all out. Here's the compleat quip:

I FWOE'd at the 32A/26D cross. I entered Cuz for "Reason why not,"  which I did change to COz when I got CLOT for "Artery problem" - even though COz seemed weird - but, I didn't know "Filmmaker Riefenstahl" and I decided that LEzI was an okay name. But it isn't. Add German film makers to the list of topics I have to bone up on.

Anyhoo, there were plenty of other dimensions to this puzzle. I enjoyed:
"Back-comb" (TEASE)
"Full of promise, as an outlook" (ROSY)
"Instance of psychological trickery" (HEADGAME)
"Accepts, as an argument" (BUYS) 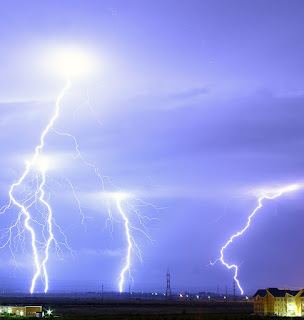 In addition to the straight-up solid clues and answers listed above, there were several clues that took it to the next level:
"Prepare to get a hand" (ANTE)
"What someone might make a stand for?" (TACOS)
"Classic story in which Paris figures prominently" (ILIAD)
And my favorite, "Letters from down on the farm?" (EIEIO) - LOL.