I enjoyed this oversized Wednesday offering from Mr. Steinberg, in large part because I was forced to hunt for the camouflaged creatures. They told us the rows, but they did not highlight the animals, which was nice. The ones I found were a chameleon, an octopus, a leaf insect, and a leopard. Not bad at all. As far as I understand the natural world, the leopard and the leaf insect merely use their static coats and/or shape to blend into their natural environment, while the top two can actually adapt their coloring to match many different colors and even, in the octopus, textures. Have you seen the recent videos of octopodes? It's really almost impossible to believe what they are capable of. Also, we learned recently (probably from PBS) that they are one of our most distant relatives. Their kind branched off very early in the whole "living creatures" era. Also, while they have been shown to be highly intelligent, they are not tended to by either parent after they hatch, which seems to indicate 100% nature over nurture. (OK, Frannie, you've won this round!...) 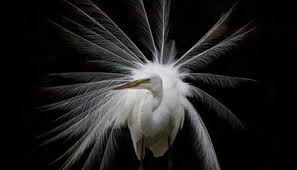 I was greatly helped as I started my solve by having just recently missed finding the word ANAPHORA (Repetition of words at the starts of successive phrases, in rhetoric) while playing the "Spelling Bee" on the NYT puzzles and games page. Frannie and I have been very much enjoying that of late, but we will have a few questions for Mr. Ezersky when we see him in Stamford next March about how he decides which words to accept and which to refuse. Anyway, we always look to see what we've missed (if anything), and when we saw this one (and anaphor), we looked it up. I can never keep all those rhetorical devices straight!

I enjoyed finding BECHAMEL (French white sauce), ANEMONE (Sea ____ (tide pool dweller)), GALILEO (Astronomer who first observed Saturn's rings) (That must have been cool!), ELISION (Feature of "G'day" or "Yes'm"), and SIPHON (Gas thief's device) (Does this still happen?). And I liked seeing the late, great PAULINE Kael in the middle, there.

Really, it's quite a clean(ISH) grid. A few things like CROUP (Infant's ailment) and CREEL (Fishing basket) to ease us into the Turn (the three late-week puzzles), but nothing that I found particularly troubling. Also, I like that it's running so close to Halloween, when lots of people will be using CAMOUFLAGE of a sort.

Lastly, I think Michelle Wie is one of my brother's favorites, and thanks to him, I was able to fill LPGA right in! I'll take crossword help wherever I can get it. :)