Man I really plowed through this one. When I got to 18A: Modern host of 35-Across (DREWCAREY), I had enough crosses to fill it in immediately, then I filled in 35-Across immediately, and when I got to the third one, I had that too. The "circled-letter" part of the theme I just noticed now. If you start at the 3:00 position and go clockwise, it spells out "SHOWCASE SHOWDOWN." Huh. I guess it's supposed to look like that big wheel they spin? Odd. 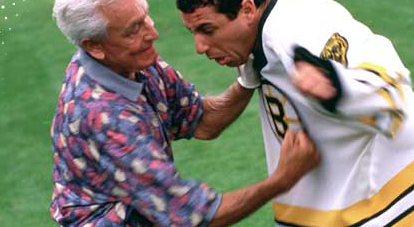 Despite the fast time, it did not start well for our hero. The two long downs in the NW were not obvious to me. I tried "stirred up" for BREWEDUP (4D: Fomented trouble), and when that didn't work, I gave up and moved on. GASRING (24D: Blue circle on a range) was another one that drew a blank at first, and I couldn't think of BILBO (1A: Friend of Gandalf) either, so I panicked momentarily before zooming through such crosswordese as TORI, SOYA, ARIL, and NANA, which got me back on track.

In other places, even somewhat trickier stuff like IDLEWILD (37D: Original name for J.F.K. Airport) came bubbling back up from the depths of my memory. I think I learned that little tidbit from listening to Mel Brooks' "2000-Year-Old Man" on LP. HAH! I wasn't just wasting my time! (The name change took place in 1963, by the way.)

Plenty of good, interesting fill in here. URANUS (10D: Planet with 27 moons) is not commonly seen in the grid, and I just mentioned MOHS (27D: Mineralogist for whom a scale is named) a day or two ago, so it's nice to see him again. The reckless driving duet (WEAVES, SPEED) is fun, and I'm glad BEERCAN wasn't clued with something like "Item thrown from the window of a recklessly driven car." TERCE (45D: Canonical hour before sext) and ABBAS (44D: Palestinian leader Mahmoud ____) might be a tad non-Tuesday-ish, but I didn't actually encounter them while I was solving, so I guess it didn't matter much.

Finally, did anyone else chuckle at 56A: "O, I am ____!" (Polonius's last words)) (SLAIN)? They've really been pounding that scene recently. You think Mr. Shortz just re-read Hamlet? Or maybe he played Polonius in a high school production, and he's working out some demons. Hahahahaaa… Just kidding, Will. We love you!