Sure, going absolutely nowhere for three weeks, working from home every day, and zigzagging across the street every time you see someone walking towards you on the sidewalk takes a bit of getting used to, but you know things are really weird when the Friday NYTX puzzle has a theme, albeit a modest one [GAPE]. The revealer, U2's first Billboard #1 hit WITHORWITHOUTYOU, provides a hint to four other answers in the grid. Two of the answers are family names in Shakespeare, both of which contain the letter U (MONTAGUE and CAPULET). The other two theme answers are the same family names without the U (MONTAGE and CAPLET). Funny that Mr. Deeney noticed the sit'ation and was able to tie it together with the U2 song.

Overall, I thought the puzzle played a bit easy for a Friday. I expect at least some of our esteemed readers to raise an eyebrow as they read that statement in light of the glaring FWOE above. Readers, I erred. I entered ERin at 6D (Language in which 'Hello, how are you?' is 'Halo, ciamar a tha thu?'). The first two letters, being correct, caused no trouble. As soon as I got the theme, the fourth letter was corrected, but I never revisited the clue/answer as a whole. When I got to 18A: "Some phone notifications during March Madness," I saw UPiETALERTS. Even as both a non-phone user and a non-March Madness person, I knew that couldn't be right, but I thought UPnETALERTS seemed plausible and ERnE, at a glance, seemed like a perfectly cromulent answer - and it is - just not for that particular clue. The correct answer, UPSETALERTS, once I saw it, was particularly apt. Apt!

Also in re: Friday puzzles, I thought that one pair of clues nicely illustrated our ongoing QMC/non-QMC conundrum (see glossary):

QMC: "Help to get back on one's feet?" REANIMATE
Non-QMC: "Apple varieties" (IMACS)

In other news, Jai ALAI is back! When was the last time that was in the puzzle? (Answer: over a year ago). The form of the clue (Jai ___) made it a gimme, as was also the case with __ Jima (IWO). Clues like those two, plus the fact that once you got one theme answer, the other three were pretty obvious, contributed to making the puzzle seem on the easy side. 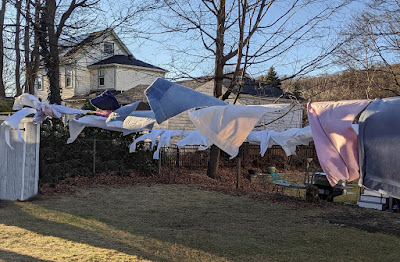 I was entertained by the two "pound" clues: "One might be measured by the pound" (MUTT) and "Place for a #" (TWEET). I thought "In one year and out the other" (FADS) was a fun clue. I also enjoyed "True that" (ITIS) and In need of toning down (ABITMUCH). GINGERED (up) is ALLNEW to me, and an interesting expression to boot. GELID is nice. I've always liked the word COY. And who doesn't like a PIECEOFCAKE?

I haven't heard or thought of Xavier CUGAT in years. According to the Wikipedia, he was married to Charo for 12 years. She was his fifth wife, apparently. MYSHARONA!

In this time of physical distancing, I thought I'd mention that we welcome your comments on the daily puzzle here at HAFDTNYTCPFCA (see glossary). Input from the outside is the only way we'll know we haven't SEEST to exist.