A solid finish to the Turn today with this chunky grid from Mr. McCarty. First off, I like the pinwheel pattern. And even with all those crosses to manage, the only entry that got a groan was RADIUMS (Isotopes of element #88). I'm sorry to lead with it, but at least it's now out of the way, and we can dig into all the good stuff.

The most satisfying entry for me, personally, today was ALYDAR (Runner-up to Affirmed in every 1978 Triple Crown race), which I entered (although, admittedly, misspelled at first as ALoDAR) off the A in CHANEL (Who said "Fashion changes, but style endures). It's not something that I knew was in my head, but when I saw the first letter and the length, it just came out. And it can really only have been from seeing this SI cover 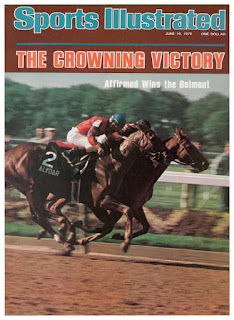 on the ceiling of my brother's room while I was growing up. He lined the slanted ceilings with SI covers, and I think I know a lot more about 60s and 70s sports because of it.

So that's a little something about me (and Bobby), but let's get back to the grid, shall we? Other things, for me (always back to me, I see...), came a little more slowly. Like GASCAPS for "Tank tops?" - for which I confidently entered "turretS," or LOTTERYPICK (Reward for a bad N.B.A. team), where highEstPICK also fits. Maybe I don't understand the system (it wasn't spelled out on SI covers in my youth, apparently), but I thought lots of teams got LOTTERYPICKs, and the worst ones got the first ones. Anybody?

And how about the lovely heteronym clue for TBAR (Tower on a mountain)? I kept thinking, "'Radio antenna' doesn't fit... and aren't those tall things just called towers?" But no, they were talking about the freezing cold metal poles and crossbars that HAULUP skiers. And I've mostly seen them on the bunny slopes, where nobody is really used to them, so sometimes there's a lot of DRAMA as novices try to half-sit, half-stand in a moving line of people wearing six-foot slabs of wood on their shoes. Fun times.

What was your favorite entry?

Posted by Horace Fawley at 9:27 AM