I like how my reviewing week has been lining up with Ms. Weintraub's puzzles lately. I got one in early March, and here's another one today! And as usual, it was a smooth solve RIFE with fun entries. 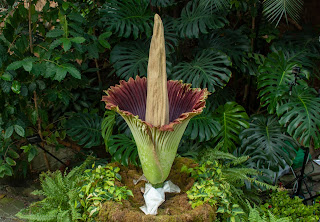 First off, who knew that SILAGE was fermented?! It's grass that is tightly packed and stored without drying it out first (unlike hay), which sounds a lot like making sauerkraut to me. It almost makes me want to try some! ANYTAKERS? Learning stuff like this is just one of the many pleasures of crossword puzzling.

I've neither read nor seen "A Winter's Tale," but still I have heard of the famous stage direction "EXIT, pursued by a bear," which got the puzzle started off with a chuckle. (Maybe I should make time during this strange time to read it.) The "Weekend shopping venue" (GARAGESALE), made me think of my Aunt Nancy, who normally spends every weekend of the spring hitting as many such sales as she can up and down the lower coast of Maine - at least she usually does, but this spring is a little different. ... sigh. And speaking of Maine, TOPSCORE made me think of going to arcades in Maine with my brother way back when. When he got the TOPSCORE on Missile Command, he would enter his girlfriend's initials instead of his own, which I thought was a pretty nice tribute.

Speaking of games, I'm not sure why it's terribly surprising that no team from ASIA has ever won the FIFA World Cup. It's not really even surprising to me that the U.S.A. has never won a world cup. It's just not done. The World Cup means South America and Europe. Period.

Loved the Non-QMCs for ELECTORATE (Seasonal pickers), ROADATLAS (It's bound to show you the way), and EXILE (One who needs to go). And while the "in a way" and "say" are kind of like question marks, I still enjoyed the clues for PLOW (Get off the street, in a way) and TOUCHTYPES (Enters without looking, say).

The Turn is off to a fine start, I'd say. Hope you enjoyed it too.