OMG. I didn't even notice that this was a Patrick Berry. It makes my blistering Friday time a little less amazing, since I tend to think I've got Mr. Berry's number. Well, not so much that I have his number, but that, as Colum and I were just saying yesterday, his grids are full of such good fill, such normal words, that they seem easier, because you don't have to think to yourself, "What's that stupid little word for this or that that you only see in crosswords?" Anyway, I thought I was peaking a week late for the tournament! And speaking of the tournament, Mr. Berry is one person I really was hoping to see there, but another constructor told me that he never shows up. Is that true? Are you out there? Why won't you come to Stamford to meet your adoring public? Why?

So anyway, now that I know who made it, I guess it's no surprise, as I said, that there is absolutely nothing terrible in here. So clean and smooth. Not quite as open as he sometimes is, maybe, but still plenty of space as you move around the grid, and a nice, thick middle section.

I started over in the NE, where I tried "patsy" for 8A: Sucker (CHUMP), and then erased it when I put in the almost-equally erroneous "ManowAr" for 11D: Saucer-shaped jellyfish. (MEDUSAS). I guess the man-o-war isn't really saucer-shaped. Come to think of it, it might be the only one that isn't saucer-shaped! 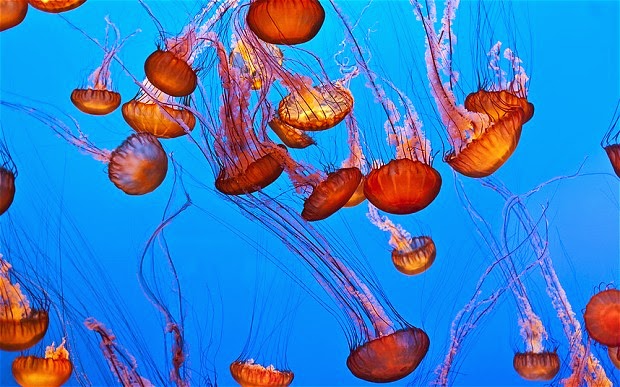 With those mistakes to start, it's a wonder I got anywhere at all up there, but PREPPY (12D: Wearing a polo shirt and boat shoes) was a gimme for someone who went to high school and college in the '80s, and SWELLUP (20A: Become big after a hit) came pretty quickly too. HILL (9D: Reason to downshift) is easy for one who still drives a stick, but UKULELE (10D: It's played close to the chest) took at least five crosses. Nice one, that.

Other clues I liked were 51A: One who just can't lose (POORSPORT), 46D: Site of Santa sightings (MALL) (tried "pole" here), 45A: Gentleman's agreement (YESMAAM) (nice!), 54A: "It has quick ears to an accusation," per Henry Fielding (GUILT), and 27A: Place to take an umbrella (BEACH). Simple, but effective.

Not much more to add. Always a treat, Patrick Berry. Why don't you come out next year? I'll buy you a drink. I promise.