Frannie here. When Horace asked me to take over for the day, I started to think about an angle for the review, and then it hit me: how about a RECTANGLE! That's when the review really started to take shape.

The whole thing went right along for me except the NW corner. I got stuck on both foreign language clues, believe it or not. I entered ellA where DONA belongs and it took me a few moments to back out of that one (so to speak). 14A. 2013-'14 N.B.A. All-Star Joakim was NOAH help to me at all. And, while trying to figure out 1A, I was certainly using expressions of frustration abroad of my own, just not the correct (or printable) ones! (ACHS).

Theme-wise I thought the puzzle held up pretty well. I thought Huygens was probably enjoying it. I am a big fan of PARALLELOGRAM, both the word and the shape. Two lines that never meet. We should be able to come up with a joke that has that as an element or punchline, shouldn't we? What do you call two building additions? Pair o ells? Okay, that might need some more work. But it does feature our old crosswordese friend ELL! The shape theme clues helped me get 54A. "Wake Up With AL" co-host. I am not familiar with the show, but I had three of the four letters for 58A. GEAR, geometrically, so I knew the bottom right corner had to be an R, and the only unused letter remaining in the theme clues was K, so I put those in the correct circles and immediately realized the answer was ROKER. Ha!

On a SIDENOTE (11D. Incidental remark), there were a few clunkers. To wit: 50D. Nearing midnight (ELEVEN), which I found unlovely and uninspired. Another non-favorite was 66A. Symbol of authority (REIN). Meh. There also a couple of POOR fillers like SDAK, GTE, and LIRR. I'm fairly sure Huygens is not going to like38D. Lumbago (BACKPAIN) due to troubling associations, but you have to admit Lumbago is a pretty great word. 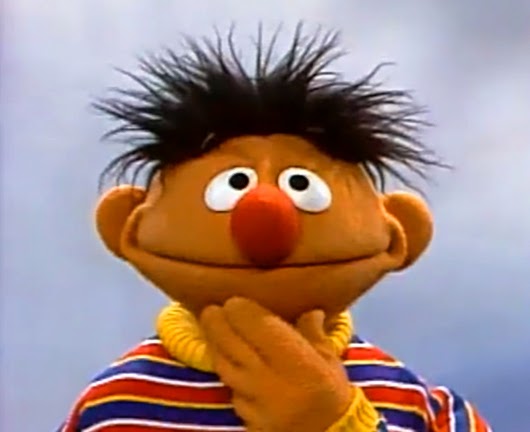 On the DOS side (13D. Commendable activities), there were several fun clues. I quite enjoyed 69A. Excels over, in slang (OWNS). It was nice to be reminded of Lady ELAINE, from Mr. Rogers' Neighborhood (53D), and who doesn't love ERNIE (18A. Resident of 123 Sesame Street)? 71A. Halves of an old item? (EXES) is also humorous. Once I got ellA out of DONA's spot, the clever HANGAR (3D. Jet setting) went in and lead to the completion of the puzzle.

In sum, a LARGELY (55A. For the most part) satisfying theme plus some amusing clues to round out the puzzle.