A most unusual grid today. The 48 black squares are in the shape of four letters that can spell out four different words, and those words are used to clue four different answers.

Not bad. I think the only two I thought about as I put them in were CABANAS and ERGO. That last one was right where I ended up the solve today. I think the W of MEOW (25D: ____ Mix) was the last letter in. Because, no, even though I watched my share of "Dukes of Hazard," I did not know 38A: Tom who played TV's Luke Duke (WOPAT). The only actor's name I know from that show is Catherine Bach. 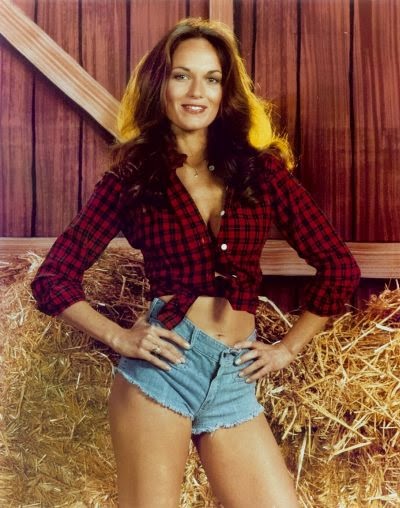 Shameless, I know, but it leads right into another puzzle answer - OGLED (35A: Made one's desire clear, say). Fun clue for that one. And another nice clue for standard fare was "55A: When the French toast?" (ETE). Heh. Summer... tanning...

The odd grid forces some less-than-desirable plurals, and some icky short stuff like EDIN (48A: ____ chief (mag. V.I.P.)), IME (22A: The Beatles' "____ Mine"), and UNCA (18A: Donald Duck, to his nephews), but pretty much everything else is acceptable. Even MENON is made ok by its clue (25A: Favorable situation for sluggers), and it crosses NATIONALPASTIME (10D: Baseball tag), so that's nice. When's opening day again?

I liked the huge swaths of open space, and there's some really nice fill in here. SPINALTAP, of course, is great, and ATOMICREACTORS, ALLTHOSEAGAINST, SEASONEDTOTASTE, and STUPIDPETTRICKS are all lovely. And with all that the nice eights become almost pedestrian, but still, RELAXING (30D: Easeful), BLEEPOUT (16A: Censor), ALTITUDE (28D: Your highness?) (hah!), and others are all quite good.

Overall, a fun start to the turn.