A fun theme today of LADIESFIRST (59A: Chivalrous rule obeyed in this puzzle) - four familiar couples have their usual order reversed. For instance, 37A: Grimm fairy tale (hint: 59-Across) is answered by GRETELANDHANSEL. We also get JULIETANDROMEO, JANEANDDICK, and MARYANDWILLIAM (23A: Virginia university). 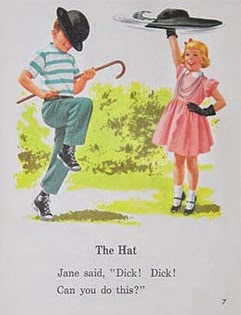 The fill is pretty clean overall, with some nice bits. I like the word TOUSLE (32A: Mess up, as the hair) for instance, and 12D: Tall Paul (BUNYON) had me stumped for a while. I'm not too familiar with the name OJIBWA (45D: Tribe traditionally living around Lake Superior), but I do know their more common name - Chippewa. DOWNTON (26D: "____ Abbey") is current, OHFUN (55D: Sarcastic comment about the task ahead) is fun, and nobody minds being reminded of the great OTOOLE (44A: Peter who played Lawrence of Arabia).

There were lots of threes, but the worst was probably MTG (29D: Business appt., often), and that isn't even all that bad. Except that it reminds me that I've got a lot of them coming up this week! I never used to have meetings before I took this new job, and now I have them all the time! Ugh.