A fun little loop-the-loop theme today, where the letters in the grayed out squares (in the online solving version, anyway - I'm not sure what it looked like on paper) are treated like little loops in a Hot Wheels track. I got the trick on the weakest one, in my opinion, BEV[ERAGER]OOM (25A: Beer parlor), and then went back immediately to fill in LOBST[ERTHER]MIDOR (23A: Fancy French shellfish dish). That one's fine, but "beverage room?" Yeah, that's what we like to call that place we go for drinks. "Hey, let's meet after work in the beverage room. It'll be loads of fun!" 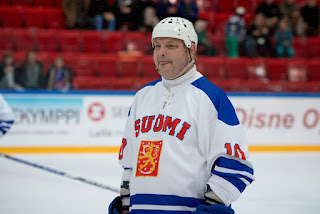 The other theme answers were all pretty good. SPOIL[ERALER]T (91A: Reason to stop reading) might have been my favorite, but CONC[ERTSER]IES was on point because last night Frannie and I saw the first in a five opera series about Joan of Arc. This was Tchaikovsky's "Maid of Orleans," and - spoiler alert - it was fantastic! Also - second spoiler alert - it doesn't end well for ol' Joanie.

It might have been slightly nicer if the loops had extended some 21-letter answers into the grid, but one can't have everything, can one.

1A: Naval engagements (SEAWARS). - D.
Favorite: BRACE (51D: Pair) - Love me some old-fashioned language.
Least:HEME (18D: Pigment in red blood cells) - Even though it was totally guessable, I don't like this one.

So it was an ok theme, but there wasn't a whole lot else that was super interesting. I liked the two "It's got you covered" clues (ATTIRE, SHELTER), and a few of the question-mark clues were fun. Then there was stuff like OOM, UTE, ETH, STER, SIE, ESA, and the like. Let's say it was fine.