Wow. It wasn't until I started writing this review that I finally understood today's theme. The word DIASTEMA (52A: Formal term for the gap suggested by ...), is defined in my Webster's as "a natural space in the body; specif., the gap between two teeth, esp. of the upper jaw." And if you look at the theme material, you find that the word "tooth" is broken across the gap in each answer. So... huh. It's a gap-toothed puzzle. 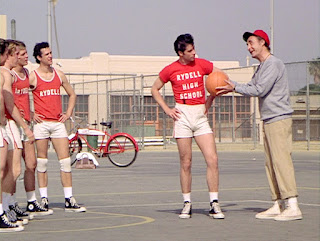 Maybe our resident MD, Colum, is aware of this term, but I was not, and I'm betting that the vast majority of NYTX solvers are not either. I could be wrong, of course. It's a common occurrence. But I would be more surprised than usual if it were true again here.

So yeah, it's nice to learn a new word, and the theme answers are all ok. DOUNTO OTHERS is probably the most normal. TOOT HISOWNHORN is a bit awkward, and SPREADTOO THIN is fine, but not great.

The fill, however, I enjoyed. 2D: Something to tie up (LOOSEEND) is an interesting one, because it looks odd in the grid, and - it's an anagram of "loosened." It makes me think that constructors probably like to use words that can be anagrammed, because it allows a little flexibility in the construction. Of course, I've not yet constructed anything, so I don't know for sure, but that's what I think. Also, I ended up really chuckling about MISADDS (7D: Does sumthing wrong?). I know - it really ought to be "Does sum thing wrong," sort of, but who cares, really? It's just a puzzle clue, and you can figure out what they mean.

And speaking of figuring things out, I looked up NESSUS (44D: Centaur who was killed by Hercules), and - spoiler alert! - it turns out that he was both killed by, and killed, in a way, Hercules. His blood was poison!

I liked the clue for REVEILLE (38D: Rising notes?), but what's up with "Quintet instrument" for VIOLIN? What about quartet, or octet, or orchestra? Strange.

My error came at NFC and CACHE because I hastily put in NFl and never went back. Tant pis.

I liked this one, but mostly thanks to the fill rather than the theme.