It's a split decision, er... split theme today - vowel runs on each side of the grid, with P_T-led answers running down the left side, and N_T down the right. I've never seen anything like this, so right off the bat I'm impressed by the complex, yet subtle theme. For a while I thought it might just be a rare themeless Monday, because the vowel runs don't exactly stand out, and there's no revealer. 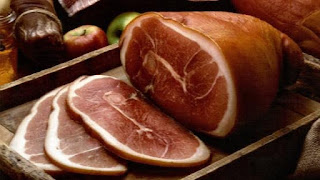 If I were to NITPICK the theme at all, I'd suggest that PETCAT (24A: Garfield, to Jon Arbuckle) rings a tad arbitrary, as a phrase, but one can't seriously argue with it. Same with NOTYET. But the rest are fine, and it does seem like an awful lot of theme.

Even with all that, though, we still get some nice long Down answers. BAYONET (7D: Musket attachment) is thrust right down the middle, and with BETATESTS, BOTTOMUP, and BATHROOM, we've almost got a mini B-letter Down words theme going. I wonder if Mr. Kingsley experimented with "Billy Jack" in the JIMMYDEAN spot... No. Probably not.

CABO at 1-Across should have been easy for at least one of our regular readers, who honeymoooned there some fifteen years ago or so.

My errors came at ELROPO, an answer I should know by now, because it has appeared often enough in these grids. I think I had E_ROP_, and I somewhat absently filled in "EuROPa" without checking either Down answer until it was too late. Sigh.

Interesting start to the week.