Turns out there are a lot more kinds of forks than I had known of. 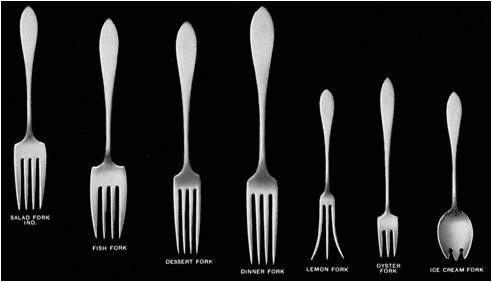 And that's not even all of them, if you include the "cocktail fork" mentioned in the puzzle. I love the idea: here, a "cocktail fork" is two types of cocktails that start with the same letters, then split apart, one continuing straight, the other at a forty-five degree angle. The challenges of this sort of thing have been covered before: any letter that is included on the fork is "triple-checked," or included in three different answers, which makes the fill much more challenging.

Of the theme answers, MARTINI / MARGARITA and CHERRYPIE / CHEESECAKE are the most dazzling (and the tastiest, in my opinion). The other three examples are only five letters long and differ by only one or two letters. I found SHARK /SHAD the most jarring, but only because they feel so different, they shouldn't fit into the category "fish," even if they o-fish-ally do. See what I did there?

There's a fair amount of less than wonderful fill due to the challenges above, but really, I'm impressed by what Mr. Stulberg was able to weave in. Look at BEEEATERS - an example of the crazy letter combos so popular nowadays among the constructing youth. BRAINLESS is also very good. My favorite may be 42D: No longer interested in (WEARYOF). I love that phrase.

So, yes, there is a bunch of EEE, AAS, COHEIR (really?), and old stalwart ESAI Morales, but I'll take it.