I fear my experience solving today's puzzle doesn't reflect well on me. I know it's a Thursday, which I further know usually contains a trick, but the left hand side of the puzzle went so smoothly that I was lulled into a false SESNES of security. Derp. I will lay some of the blame on the fact that I was feeling the pressure of having to write the review today and I kept muttering to myself, ""Oh dear! Oh dear! I shall be too late!" This interfered with my solving abilities. I mentioned to Horace that I was stuck and he asked, "is it the right side that's giving you trouble?" I said, "yes." I then started to ask, "is there a trick" and as soon as I formed and expressed that thought, I knew there *was* a trick, and I knew exactly what the trick was. To wit: Mr. Trudeau arranged the puzzle so that all the answers to the right of the top-to-bottom answer THELOOKINGGLASS (What Alice goes through to find "Jabberwocky" printed backward) are entered in reverse, so RAP becomes PAR, URSA becomes ASRU, and my favorite, TEETER becomes RETEET. Ha! The weirdest looking one, and the one that caused me much puzzlement before I realized the trick was KUEHT or THEUK. Looking at ECNUOENO also messes with my mind. However, the speed with which I completed the remainder of the puzzle after realizing the trick had me grinning like the Cheshire Cat.

In other squares, we are treated to two Simpson's characters KRUSTY and NED, as well as a party of feelings VIM, YEN, HATREDS and INLOVE. JESTED and JAMPACKED, HAEYLLEH, BASALTS, ESCORTEE, and RHOMBI are also some fine fill. 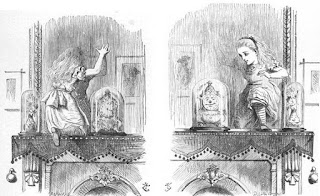 In short, in spite of feeling a little Tweedledum for being so slow to catch on to the trick, I was Tweedledeelighted by it when I got my SAEDI straightened out.