Today's theme answers pair a profession with a pun-like dis- or de- adjective. DISILLUSIONEDMAGICIAN (111A: Unemployed prestidigitator?), for example. Although I don't really agree that it works 100% because his state of employment does not mean that he is no longer able to perform illusions. It just means he isn't being paid for it right now. I suppose that's not the point, though, and, like Colum, I should try to be more upbeat. And yes, I did chuckle at that one, and at DEFILEDMANICURIST, which is cute. Is there a word for these things? They're not exactly Tom Swifties, but they are in the same family. I thought DISTRESSEDHAIRDRESSER was a little confusing, because there is such a thing as "distressed hair," but then you could also parse it as "dis-tressed," and make it kind of work for hair cutting. I also found DISPATCHEDTAILOR wanting, because how many tailors use patches? It could just be my ignorance of the profession, but if I went to get a suitcoat made, I would not expect (or want) it to come with elbow patches. And yes, I guess they could use patches to mend things, but would anyone who actually uses a tailor ever bring in anything to be patched? Oh, I don't know... perhaps I'm just out of my depth here. 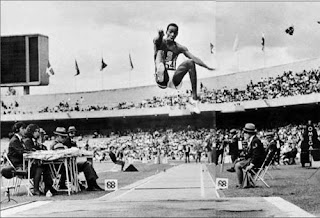 OK, that ended up sounding pretty negative. But sometimes that's the way it is with me - especially on a Sunday. I don't think it's any great secret on this blog that I am frequently less happy with a Sunday puzzle than I am with a weekday grid. Maybe it's a mea CULPa situation, or maybe it's just that there's more room on a Sunday for obscurities like BRIGANTINE, NAHA, THIEU, UTAHANS, and even VERITY. And then there's the unwelcome-to-this-Boston-Red-Sox-fan THEBAMBINO. (OK, that one's actually perfectly fine, I'm just on a roll with the complaining so I thought I'd throw it in.)

I had a great deal of difficulty in the small area including 71A: Wall Street order (PUT), 47D: "Brave New World" drug (SOMA) (Incidentally, this is the name that my favorite local coffee shop gave to one of their espresso bean blends), and 54A: Remote figure: Abbr. (VOL). That last one I very much dislike. "Remote figure?" I don't think so. "Remote key," "remote button," "remote command," maybe. "Remote figure?" No.

OK, that's enough complaining from me. This is no way to start my week of reviews. I hope you enjoyed it.