The game Trivial Pursuit had its heyday thirty-five years ago, in 1984. I played many a game around that time, and even went on to play a few of the different versions. The 80s edition was terrible, as I remember - most of the answers were "Ronald Reagan." And the Sports Edition was far too difficult for me, for although I had followed local sports pretty closely up until that point, I had not made a study of past years or other teams. Nonetheless, we played the Genus and GenusII editions often enough that Frannie's parents got us a set of those gold-plated, metal playing pieces. 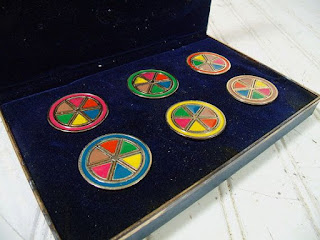 Anywhoo, I enjoyed figuring out the theme today, which references the original six categories (blue and green were always my favorites!), and when the puzzle is finished in the online version, the rebus squares turn into colored wedges that all point in, as if they were sitting in one of the deluxe holders. Or, I suppose, one of the regular plastic holders.

The long answers today are mostly related to the nuts and bolts of the theme, but the trivia continues in STAYINALIVE (118A: Song heard at the start of "Saturday Night Fever"), the classic ENOLA (50A: First name on a famous plane), and ASTORIA (49A: Oregon city that was the first permanent U.S. settlement west of the Rockies). Lewis and Clark spent the 1805-1806 winter there, at Fort Clatsop. Later (at just about the same time that DEWITT Clinton ran for president, narrowly losing to James Madison), John Jacob Astor used the location as a base for his fur company, and the city was eventually named for him

And I'll mention just one more bit of trivia in today's grid - ULYANOV (27A: Vladmir Lenin's real last name) - which I entered off the clue, thanks to my repeated listening to Monty Python records as a child. Mr. ULYANOV was one of the contestants, along with Karl Marx, Che Guevara, and Mao Zedong, on a game show called "World Forum," and he cannot answer the question he is posed about the name of the British entry in the 1959 Eurovision Song Contest. Mao challenges, and correctly gives the name of the song that finished second that year as "Sing Little Birdie." What was the Eurovision winner in 1959, you ask? "Een Beetje," by Teddy Scholten of the Netherlands.


And what a nice segue, as it were, or, as they say in Dutch, "segue," because tonight Frannie and I fly to the land of windmills and grachten. But don't worry, we can still get the Times over there, so the reviews should continue without interruption. Tot ziens!