I solved this puzzle on our flight home earlier today. Conditions were unfavorable for speed. I'm not the largest person on earth, but each of my joints was having a HOTWAR with some part of the economy seat I was crammed into - from the headrest to the armrest to the footrest to really no rest at all. So, I really felt the theme today: each set of shaded letters contained a JOINT of the human body bent at a 90 degree angle. And I heard from each one of 'em during the 8-hour flight from the NECK right down to the ANKLE. Mr. Vratsanos may have had economy airline seats in mind when he stuffed an impressive 8 joints into the the 15 x 15 grid. Let's hope no airline executives are NYTX solvers! It is possibly for the best that none of the joints really had a twist of any kind. Having WRI[ST] come off of WRIT isn't too exciting, for example, but I did chuckle a little at DANK[LE]. :) I used the theme to my advantage in the middle east. I couldn't figure out ARISTO for "Blue-blooded Brit" or TILTAT for "Clash with" until I realized I could put SHOULDER in shaded squares.

The ambient noise of the midday flight didn't do me much good, either. I hope the white noise the solvers have in their headphones during the ACPT championship is better than the soundtrack of an 8-hour midday plane trip in economy class.

But, enough about meat. How about the rest of the puzzle?
I liked AMARETTO, KLEPTO, ABOLISH, and SISAL. And who doesn't like to RUNATAB? Possibly someone who SKIMPS. I also thought the clue "Religious setback" for APSE was amusing. DOST anyone else think ENSHEATHE was a bit too too? 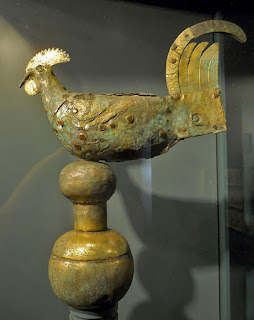 I thought ASAHI "Brewery in the Nikkei 225" and EMIL Jannings - first winner of the Best Actor Oscar (1928) - were educational, if not particularly sp'ACL.

That's about all I'm able to articulate after such a long day. Until tomorrow!