I ended with a typfwoe today. I fully intended to enter OOHANDAAH (React to pyrotechnics, say), but I inadvertently entered two H's at the end instead of two A's. When I didn't get the crescendo of congratulations to which I have latterly become accustomed, it took me quite a while to ID the problem. I blame my lack of familiarity with Tokyo's big carrier ANA.

In today's puzzle, each starred clue requires the presence of a literal UPPERHAND for the answer to make sense. So the answer to "Sets the odds for" appears as ICAPS, but when you give it the advantage of a HAND from the CHANDELIER above, you get [HAND]ICAPS. My favorite was HANDYNASTY because it's amusing when mis-parsed. I didn't actually bother to figure out the theme until I got stuck in the south east. Having absolutely no idea what letters might appear after Chuck Schumer or Kirsten Gillibrand's names, I was forced to reckon with the theme to get 64A: "Submitted." Even when I figured it out and entered [HAND]EDIN, it took me forever to parse DNY. DOH! 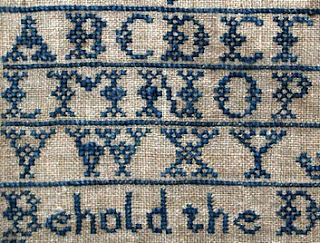 I liked both "Gives the boot" and its answer CANS. I also liked "Partner of older" (WISER) and "Singers do it" (SEW). "Big shots at a hospital, informally? (HYPOS) entertained. My favorite on the day was "Snake that's good with numbers? (ADDER) - ha!

I enjoyed "Concern for shipping and software companies" (PIRACY) and "Concern for a plumber or government official (LEAK). And, although the same but different, I enjoyed "Ending with kick or smart" (ASS).

NIHILIST and EYESHADE are fine fill.

Something bothered me about the clue "Close to a 10, say" for SEXY, and if asked, I might say OENO to "Art house theater" (CINE), but overall, I've got to hand it to Mssrs. Blake and Chen.