What did I think of today's puzzle theme? I 8 it up! The clever two-way rebus tucked PIECESOFEIGHT into 8 places around the grid. The eights were represented by the letters [ATE] in the Across answers, and took the form of two O's (picture them stacked one on top of the other) to represent the number 8 in the Down answers. I first realized we were in a rebus situation when I got to "'We can't joke about that yet?'" at 28D. The answer had to be T[OO]S[OO]N (or (T[8]S[8]N)), but obviously, it didn't fit when spelled out. It wasn't until I wanted THEFOURTHEST[ATE] (or THEFOURTHEST[8]) at 20A that I got the ATE option. I ended up using the two O approach in my rebus squares all across the grid instead of the actual number 8, which I kinda regret, but which made some of the theme answers look pretty funny in the completed grid. My favorite was H[OO]RSGONNAH[OO]. Unintended (?) hilarity.

There were a few clues that were real treasures including "Pockets of the Middle East?" (PITAS), "Nation's borders?" (ENS), "Support for a religious group?" (PEW), "Oscar-nominated actor with nearly synonymous first and last names" (RIPTORN) - Ha!

I was confounded for a time at the cross between 67A: "Chicago's ____ Expressway" and 55D: "Blyton who wrote 'The Enchanted Wood.'" I didn't know either one. But since I had ENI_ for Blyton, I thought ENID was a pretty good HUNCH. 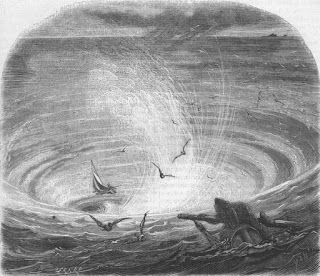 I enjoyed the trio of PARDON, SALUT, and KEPI as reminders of our recent visit to Paris. Also quite nice was Horace's (original version - although I'm pretty sure our esteemed co-blogger Horace would concur) description of MUSIC as "Sweet and healing medicine of troubles." And now I know that ASADA means grilled. WH[OO]PI! This puzzle solving hobby is really paying off.