I think today I will give up saying things like "I usually don't like circles." Today's theme would be very difficult to see without them, and it's so good with them. I suppose there could somehow be an instruction like "find the hidden god, spelled out in order..." but at that point, what's the difference? This way, there's still an "Aha moment" as you read each one and realize how cool it is that Mr. Proulx has found four perfectly normal theme entries that can work this way. Bravo and OLE! 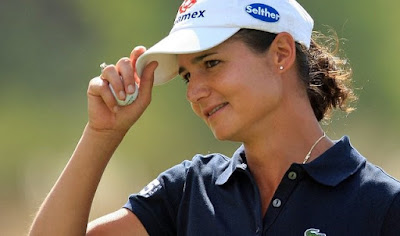 And that's not all! The rest of the grid is loaded with good fill like ANOINTS (Selects, as a successor) (Tricky clue), HERMETIC (Airtight) (Always reminds me of Carnac the Magnificent), EXERTS (Puts forth, as effort), and SIDELONG (Indirect, as a glance). I don't hear many people using the term TENTSHOW, and I don't think I've ever heard anyone use the term THEOLDS, happily. I don't really like that one. Stupid teens...

In the always popular "interesting trivia" section, we have REO (Old auto with its founder's monogram). It's a little odd that they chose to go with "Old" in the clue when the man's name was Olds, isn't it? Or was that just to make it a little more "Wednesday level?" And here's another piece of deep trivia for you - the letters in Pontiac's GTO, which was named by John DeLorean (yes, that DeLorean) stand for "Gran Tourismo Omologato." Or, approved for the Grand Tourer class (it's an auto racing thing).

As regular readers will KNOW, I'm over here in a city full of wonderful food options, but seeing REINS in the puzzle makes me a little homesick for a good turkey reuben. Mmmm.... Reins Deli....

OK, to help me get over this nostalgia I'm going to go out and eat a croissant. Then have an expresso at a cafe, then maybe an eclair... I'll really DOITUP! Ahh... HEAVEN.

And speaking of HEAVEN - is that bonus fill? Or is that only for the Catholics? Maybe all these Greek, Roman, and Norse gods have their own places to live. I suppose they must. Mount Olympus... or Asgard... something like that.

Anywho, it's a solid Wednesday. Good week so far, selon moi. I hope you're enjoying it too.