Today's a debut, and what a beautiful job Ms. Fabi has done in this themeless. It is just chock full of fun answers, clever clues, and a lovely flow (no section too cut off to make solving it like working on a separate mini-crossword puzzle). Don't you feel like the bar is getting higher and higher for good construction? Makes me happy that the bar for blogging is set so low.

Let's start with my favorite answer, which comes all the way down at 57A: Concept in artificial intelligence (TURINGTEST). For those of you who have never heard of this, it's a mind experiment put forth by Alan Turing (the main character in the movie The Imitation Game, played by Benedict Cumberbatch), wherein he suggests a person in an isolated room with two terminals, each solely connected to either a human inputting responses, or a computer, which is programmed to carry on a conversation. If the first person is unable to figure out which of his conversationalists is the computer, then it can be said to have attained artificial intelligence. I've always been fascinated by this idea. I refer you to Douglas Hofstadter's Gödel, Escher, Bach for further enjoyable reading. 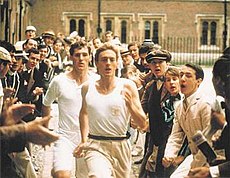 But enough about my personal interests, how about the scads of fun long answers today? THEMANDALORIAN makes its debut, and I love INTOTHENIGHT (22D: How a mysterious figure may disappear). The pair of derrières at 42A and 11D (END and POSTERIORS) were delightful.

My favorite clue today by far is 38A: Force feed (RATIONS). Holy cow, I did not see that coming until I entered the final letter. I am very glad it is not RAmdOwn, which was my first guess.

REDBEAN paste, ACTAEON (always like a reference to Greek mythology), 10A: Seoul music (KPOP)... so much goodness.

I don't think the clue at 17A: High anxiety? (ACROPHOBIA) needed the question mark. After all, there was an entire Mel Brooks movie about that very subject, called High Anxiety. There was no pause at all as I entered that answer.

I could note a few answers that are less aesthetically pleasing, but I will obey the first rule of blogging: DONTGETCUTE!