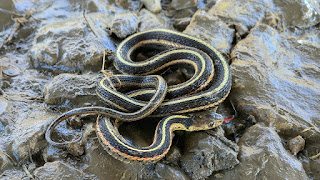 The clue "Penny going through the wash once again?" turns out to be RECYCLINGCENT, and "Soup served at the church social?" is AMENBROTH. What's happening? The final "er" is off, just like the title says! Well, almost. But "Final off er" seems fine to me, because Frannie and I mixing our syntaxes for quite some time have been. (I think it comes from trying to learn so many other languages, like Dutch, say, where the word order can be quite different from English.)

So anyway, some of the silly new phrases are pretty funny. ABSOLUTEPOW (Perfectly placed "Batman" punch?) has a nice nostalgic element, and HAPPILYEVERAFT (Always glad to be seated in the back of the boat?) is amusingly absurd. Why isn't CELLPHONENUMB (Having no feeling in one's texting hand?) as funny to me? I'm not sure. Maybe because the leap from hand to cellphone is too great? Or maybe just because it involves a cellphone at all? But most of them at least got a smile, so that's good.

But speaking of smiling, I didn't do any of it when reading 8A: Developer of 1982's E.T., a video game so bad that hundreds of thousands of unsold cartridges were secretly buried in a New Mexico landfill (ATARI). I have many questions about this, but I'm not going to look into any of them, because it's the weekend, and I'm in the middle of a vacation, and I just don't need that kind of aggravation right now. That kind of waste is NOLAUGHINGMATT! :)

And speaking of waste, I liked the two "straw" clues: "Drink rarely drunk with a straw" (ALE) and "Drinks usually drunk with straws" MALTS. Mmmm.... MALTS... I usually get one a year, and this year's is still to come! Maybe it'll be today!

Lastly, I found it interesting and appropriate that CAVITIES and FENESTRA were symmetrical.

It was a fun, quick, solve. I'm maybe still not in a crossword UTOPIA, but we all knew I'd never get there anyway.