I find today's theme a pretty funny indictment of fast food. NOTHINGBURGER with WEAKSAUCE and NOGREATSHAKES to go with it. What does it spell? HAPPYMEAL! Lol. 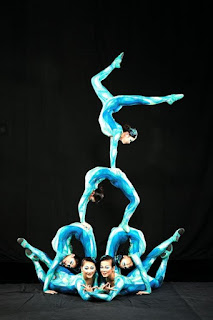 It's been quite a while since I've eaten at a fast food joint. Frannie and I sometimes like to amuse ourselves by thinking about all the stores that would not exist if everyone shopped the way we do. I won't go into it in too much detail (which probably surprises you), but there wouldn't be very many stores.

Anyway, in non-theme, I like that TRAINWRECK and RUBBERNECK are symmetrical, and somewhat related. And what an odd clue for SYLLABLE (One of 14 in "supercalifragilisticexpialidocious")! When I was young, I learned to mimic the way that Mary Poppins said it "backwards," but after a while I realized that it wasn't actually the right pronunciation of what it would sound like if it were spelled backwards. Not surprisingly, others have thought along similar lines, and it has been noted that Poppins does say, "You know, you can say it backwards..." and if the seven prosodic feet (each composed of two SYLLABLEs) are read backward, it comes close to what she said. Except for the "rupus" part at the end, which should just be "super." I was surprised and delighted to learn that the "super" form of the backward pronunciation was used by Ghostface Killah in his song "Buck 50." And once again, doing the crossword leads me into a new discovery. :)

In CoT clues (Clever or Tricky) today, I include "Do after dark" (SOIREE), "Rock around the Christmas tree? (COAL), and "Print sources, maybe" (PAWS). That last one was the site of my FWOE. I had idiotically (because the word is in the clue) put in "rACE" at 1A and I never went back to check on 1D. And since "rAWS" is kind of a word, it took me a good long while to figure out what was wrong. Sigh.

But I enjoyed the theme today, and I learned a lot about Supercalifragilisticexpialidocious and one former member of the Wu Tang clan, and really, what else does one need to start their Wednesday?

Posted by Horace Fawley at 9:06 AM