I had an idea of penning my analysis sans symbols barred by 71A's square fillings - a very challenging mission which I quickly gave up on. According to the revealer, the answer NOTNOW, "if read in four pieces" was an aid in solving several clues. I managed to solve the puzzle even though I only partially understood the directive. It all seems so clear in hindsight, but in the race to solve the puzzle as fast as I could (it is my review week), I glossed over the "four pieces" part and understood it as NOT the letters in the word NOW. That was close enough for me to figure out the clues that weren't making sense to me alongside the entries I already had. I did wonder about 12D, though. The clue is "Wrought". Solving it my way, the clue should have been transformed to "rugh", but I could see from the grid that the answer was supposed to be COARSE, so I ignored the problem, finished the puzzle, and mentioned it to Horace. He spelled out the correct reading of 'No T, No W' for me and the fog lifted. It's a clever twist.

I enjoyed the fact that the revealer didn't reveal exactly which clues needed to be modified, although, it became pretty clear to me after my first passes: the empty squares in my grid were a pretty good indication of where to look. :) I only just realized as I reviewed the puzzle for this review that one of the C/APs that made no sense to me was one of the trick clues: 2D: "Wariest animal" which is apt once you decode it to 'aries animal' (RAM). Apt! 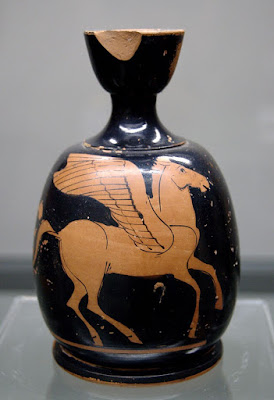 And speaking of PEGASUS, we have a nice HAUL from ancient times with SPARTA, AVE, ARES, and AMO down there in the underworld - with a shout out up high for the HELOTS.

Elsewhere in the puzzle I enjoyed "Place in office" (INSTALL), the beautifully misleading "Like all prime numbers besides one" (ODD), and "Sound off?" (MUTE). Fill-wise, I liked DOWSE and SCATHE, though one doesn't often see it as a present tense verb: I scathe, you scathe, we scathe ....